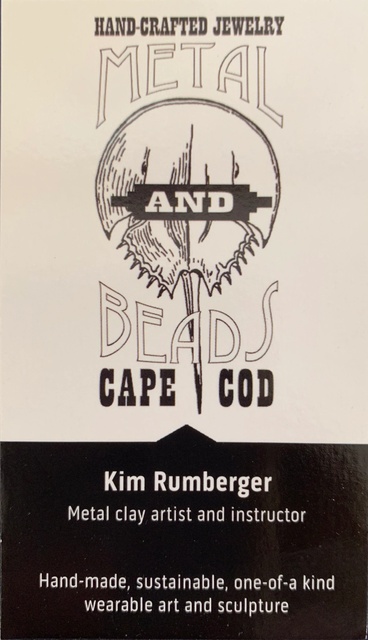 Kim is a Cape Cod, Massachusetts artist and instructor.

Kim was surrounded by art as a child and became a silversmith in high school and studied mixed metals in college. In 2014 she discovered a new medium called metal clay and has been teaching and working in it ever since. Her work has been selected for numerous juried shows, including placing first in 3-dimensional art in the 2015 All Cape Art Show in Chatham. Kim is a juried member of the HyArts District Artist Shanties and the Orleans Art Cottages, as well as a mentor for high school students in ArtWorks, through the Cape & Islands Workforce Development Board.

She resides in Hyannis with her husband, Tim, and their 2 rescued rat terriers and a feral cat (who will eat anything). Tim is a  foreign language teacher and administrator in Mashpee Public Schools,  on the Cape. They have 3 grown sons, one who runs a Habitat for Humanity ReStore (and is also a visual artist), one who is a Ph.D. candidate in high energy particle physics, and one who has his own clothing and accessories business on Cape Cod called Cape Fifteen.

Pleased and proud to have received these awards for my work

The Alliance for Metal Caly Artists Worldwide awarded this piece the honor of the People's Choice Award for the Sea & Sky Challenge 2019!


One of 10 selected pieces, metal clay artists from around the world voted for the one piece they thought deserved the recognition, and I could not be more humbly honored!  See more about "Freedom of Expression" in my sculptures section at my online shop.

As one of my very first juried show entries, this necklace earned first place prize in 3D art in the 20th Annual All Cape Art Show and Open Juried Exhibition, Spring 2015. This was a huge surprise for me, having only been learning about and dabbling with metal clay for less than a year. It was my first monetary prize as well!  Quite honored!
The inclusion is a piece of beach glass I found in Nahant, Massachusetts, and the strips are parts of a failed attempt of making a ring; the recycled parts.  There is also a hollow bead for the clasp, and the bead caps were formed over cake decorating tips.  A poem has since been written about it in the annual Mutual Muses event at the Cultural Center of Cape Cod.